Hildebrand carved out a distinguished career across two disciplines: first in particle physics, and then in astrophysics, where he revolutionized the field of far-infrared astronomy and took the first measurements of the polarized emissions from interstellar dust.

Roger Hildebrand died on Thursday the 21st of January, 2021.

Prof. Emeritus Roger Hildebrand, who worked on the Manhattan Project as an undergraduate before conducting pioneering work in particle physics and astrophysics at the University of Chicago, died January 21, 2021. He was 98 years old.

As a 19-year-old student at the University of California, Berkeley, Hildebrand was recruited to help in laboratories for the Manhattan Project, helping to create the first samples of plutonium, though no one told him precisely what he was working on. But the experience ultimately led him to a lifelong love of physics. Hildebrand spent nearly seven decades at The University of Chicago, carving out a distinguished career across two disciplines: first in particle physics, and then in astrophysics, where he revolutionized the field of far-infrared astronomy and took the first measurements of the polarized emissions from interstellar dust.

The Samuel K. Allison Distinguished Service Professor Emeritus of Astronomy and Astrophysics and Physics, Hildebrand is thought to have been the last scientist remaining at the University of Chicago to have worked on the Manhattan Project.

“He was a giant—far ahead of his time in measuring the polarized emission of dusty star-forming interstellar gas clouds and realizing the critical physical processes these challenging measurements could reveal. And not only was he a pioneer in this field, he was a wonderful supporter of graduate students and junior faculty and a rescuer of projects,” said John Carlstrom, the Subramanyan Chandrasekhar Distinguished Service Professor and chair of Astronomy & Astrophysics. “You don’t meet people like Roger all that often.”

Born May 1, 1922 in Berkeley, California, Hildebrand attended UC Berkeley intending to follow in the footsteps of his father, who was a professor of chemistry there. “But I was made a physicist by fiat,” he said; five days after the attack on Pearl Harbor, and only shortly after Hildebrand finished his semester exams, Manhattan Project physicist Ernest O. Lawrence approached him and asked if he wanted to help with the war effort.

“I told him: ‘Yes, but you do realize that I’m not a physicist; I’m an undergraduate chemist?’” Hildebrand recalled. “And he said: ‘Well, you’re going to have to learn physics in a hurry.’”

Hildebrand did, quickly learning to operate a cyclotron at Berkeley that was making the first-ever samples of plutonium and neptunium. (He didn’t learn what had been done with the samples until years later, when he arrived at the University of Chicago and learned they had been sent to the campus and measured for the first time.) Then Hildebrand was sent to train staff to separate uranium at the secret Manhattan Project facility in Oak Ridge, Tennessee.

After the war, Hildebrand returned to Berkeley to finish his undergraduate degree in chemistry in 1947 and then a graduate degree in physics in 1951. The following year, he accepted a faculty position at the University of Chicago, where he joined a physics department that included Nobel laureates Enrico Fermi, Maria Goeppert Mayer and Robert Mulliken, among others. “This was, at that time, without doubt — with no doubt whatever — the best department in the world. And I managed to do just well enough to stay,” he told the Atomic Heritage Foundation in 2016.

Hildebrand began his career as a particle physicist. One of his first experiments was to investigate the nature of elementary particles called pions; he proved that the three flavors they came in were an isotopic triplet. Then in 1955, he and two colleagues built a hydrogen bubble chamber and became the first to use it to photograph nuclear reactions.

However, his children recalled that as particle physics began to require larger and larger accelerators, Hildebrand decided he was better suited to smaller collaborations and made a rare mid-career shift, turning to astrophysics. He had been intrigued by cosmic rays — highly energetic particles that sometimes crash into Earth, carrying evidence of conditions out in the universe at large. In the 1960s, together with The University of Chicago collaborator Peter Meyer, he conducted high-altitude balloon experiments to show that positrons entering the Earth’s atmosphere had been created by collisions between cosmic rays and interstellar flotsam.

But the trajectory that would shape the rest of his life began when colleague Roland Winston invented a device called a light concentrator, and Hildebrand realized it could be used to collect light in the far infrared spectrum — a wavelength that, prior to this breakthrough, had been extremely difficult for astronomers to see. These wavelengths are particularly well-suited for understanding the births of stars, which are often hidden inside clouds that don’t allow other types of light to pass through.

“He revolutionized sub-millimeter astronomy twice — first opening the door to seeing the universe at this wavelength, and then by making the first measurements of the polarization of sub-millimeter light from an astrophysical source, which launched an entirely new field,” said Giles Novak, a professor of astrophysics at Northwestern University who earned his Ph.D. in Hildebrand’s lab and collaborated with him for decades.

Hildebrand also served in multiple administrative roles over the years: as associate director of high-energy physics at Argonne from 1958 to 1964; as director of the Enrico Fermi Institute from 1965 to 1968; as dean of the undergraduate College at the University of Chicago from 1969 to 1973; and as chair of the Department of Astronomy and Astrophysics from 1984 to 1988.

“Roger served as dean of the College during the zenith of the Vietnam War era from 1969 to 1973. It was a time of enormous social tension and dislocation and feelings of grave crisis on the part of many students and faculty,” said John W. Boyer, dean of the College. “Roger provided calm, steady, and enlightened leadership, urging the faculty to remain optimistic about the longer-term future of the University. He was particularly interested in encouraging more students to get involved in original research, which he saw as the heart of the University’s mission, and in encouraging stronger links between the College and the graduate and professional schools.”

In addition, Hildebrand sat on numerous committees and advisory roles for NASA, the National Science Foundation, and international collaborations such as the Large Millimeter Telescope and the Submillimeter Array.

Colleagues and former students also praised his dedication to teaching and mentoring both undergraduate and graduate students. “He was a tremendous role model, and I consider myself lucky to have been his student,” said Novak. He insisted on crediting students for their work at every opportunity, and multiple former students said they found themselves modeling “what Roger would do” in their own professorships.

“Roger was a light in our lives. He was a model of wisdom, thoughtfulness, and integrity,” said Prof. Henry Frisch, his colleague for many years. “For example, after he helped build the Zero Gradient Synchrotron at Argonne, he stepped down doing measurements with the beam because he felt it would be a conflict of interest with other scientists trying to access the beam. There aren’t many who would do that, but that was pure Roger.”

Hildebrand formally retired in 1992, but he continued to conduct research for decades. Well into his 80s, he was still working with colleagues on an instrument called the High-resolution Airborne Wide-band Camera (HAWC), which flew aboard NASA’s Stratospheric Observatory for Infrared Astronomy (SOFIA) airborne telescope for the first time in 2016.

Hildebrand was a fellow of the American Physical Society and of the American Academy of Arts and Sciences, as well as a Guggenheim Fellow and a Sloan Foundation Fellow. He also received the Quantrell Award for Excellence in Undergraduate Teaching in 1960 and the Norman Maclean Faculty Award in 1999.

Adapted from the obituary written for the University of Chicago News by Louise Lerner, Jan. 27, 2021.

A Version of this Pub 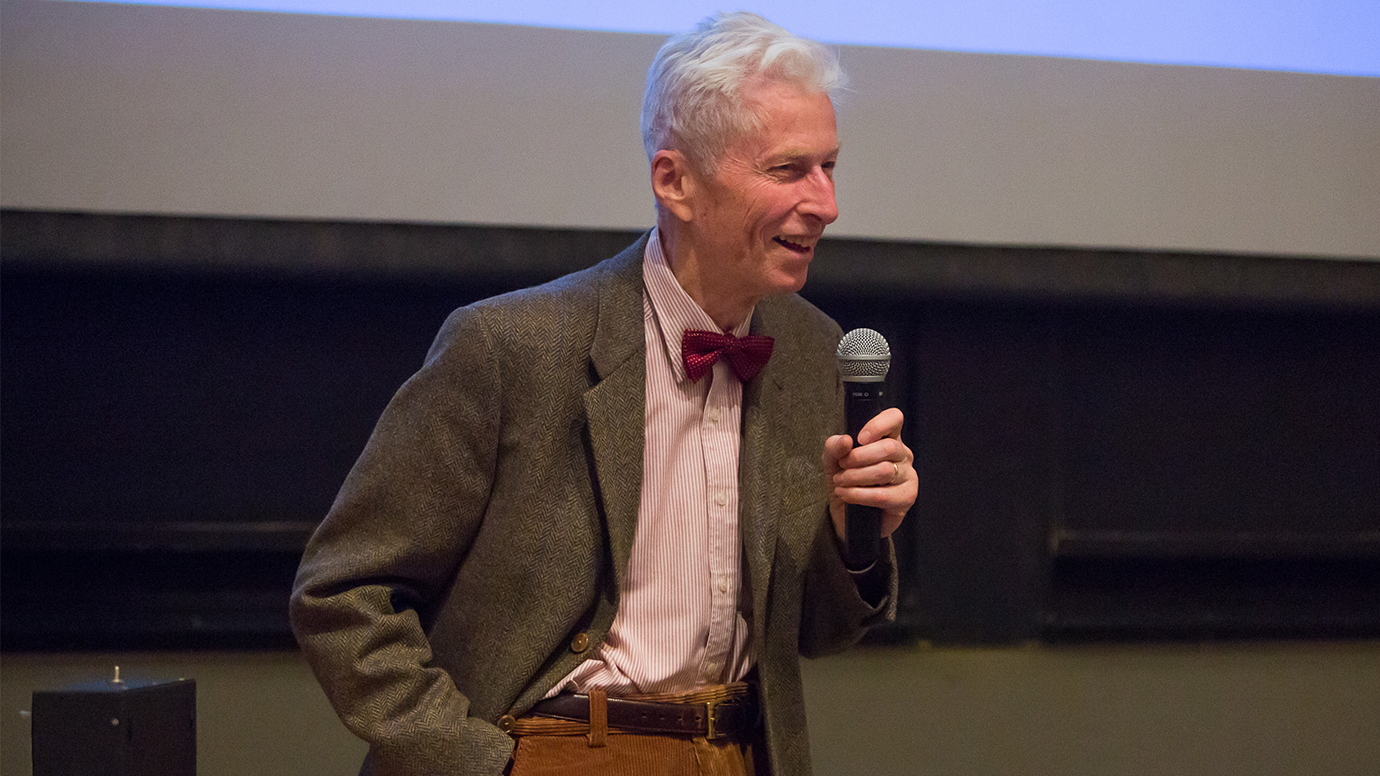