Phillips opened a new window to the cosmos in the millimeter and submillimeter wavebands of light. His work led to the detection of the signatures of atoms and molecules that form the ingredients of new stars and planetary systems. 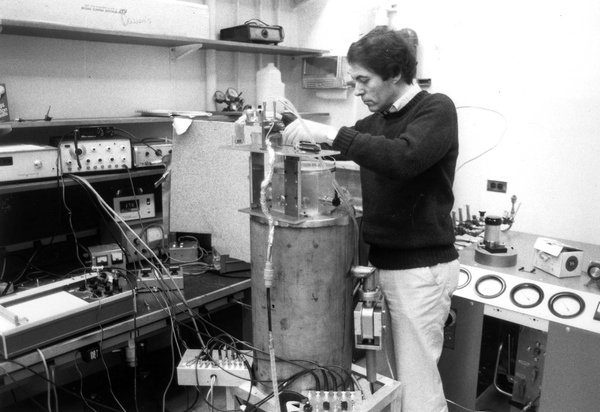 Thomas G. Phillips, the John D. MacArthur Professor of Physics, Emeritus, passed away on August 6, 2022. He was 85.

Phillips was a pioneer in observational astronomy, opening a new window to the cosmos in the millimeter and submillimeter wavebands of light. He led national and international teams that developed both ground- and space-based telescopes to observe in this portion of the electromagnetic spectrum, which allows astronomers to peer into regions of space enshrouded by large amounts of dust and gas. Phillips made several discoveries using millimeter and submillimeter instruments, including the detection of the signatures of atoms and molecules that form the ingredients of new stars and planetary systems.

In the 1980’s, Phillips led the development of Caltech’s Owens Valley Radio Observatory (OVRO) millimeter-wave interferometer as well as the Caltech Submillimeter Observatory (CSO) in Hawai'i (which is currently being decommissioned and moved to Chile).

As the director of the CSO from 1986 to 2013, he traveled back and forth to the telescope's site atop Maunakea, where he would observe the cosmos at night, and, according to professor of physics Sunil Golwala, would play golf in the morning.

“He loved to golf,” says Golwala, who has served as the director of CSO since 2013. “I was a postdoc when I arrived at Caltech, and CSO was in full swing under Tom’s leadership. He ran the observatory like a physics experiment. We were welcome to test instruments there, and he encouraged us to figure things out from scratch.”

In the late 1970’s, while working at Bell Laboratories in New Jersey, Phillips pioneered the design and optimization of a new type of detector for submillimeter astronomy, called the SIS receiver (for superconductor-insulator-superconductor). Other scientists came up with a similar device at the same time, but, says Phillips’s longtime colleague and friend Jonas Zmuidzinas (BS '81), the Merle Kingsley Professor of Physics and director of Caltech Optical Observatories, “it was Tom who took the device and showed how it could be used in astronomy.”

The SIS devices would reshape astronomy. They made their debut at OVRO, followed by CSO in Hawai'i, and later the Atacama Large Millimeter/submillimeter Array (ALMA) in Chile, the world’s most expensive ground-based observatory in operation today. SIS receivers on ALMA enabled the recent black hole images produced by the Event Horizon Telescope collaboration, images of young planets still under construction in the disks around young stars, and much more. They were also used on the European-led Herschel Space Observatory, which detected far-infrared and submillimeter light from 2009 to 2013.

“The role that Phillips and his colleagues at Bell, and later Caltech, played (as well as Paul Richards and his colleagues at UC Berkeley) in bringing these devices to the attention of the THz community, can never be overshadowed,” wrote Peter Siegel, Phillips’s collaborator on Herschel, editor-in-chief of the IEEE Journal of Microwaves, and a retired senior research scientist at JPL, which Caltech manages for NASA, in an essay called “Terahertz Pioneer: Thomas G. Phillips” [1]. (THz or terahertz is another term for submillimeter light and refers to frequencies rather than wavelengths.)

A symposium held in Phillips’ honor in 2009 celebrated his crucial contributions to the development of submillimeter astronomy on the ground and in space. “This is the legacy of Tom Phillips, who for nearly four decades has been at the center of the most important developments in this field,” stated the conference introduction.

Phillips’s role in the Herschel Space Observatory began long before the mission launched in 2009. In fact, the seeds for the HIFI instrument on Herschel (Heterodyne Instrument for the Far-Infrared) began with Phillips as far back as the late 1970’s, when he had been pushing for a large submillimeter and infrared space observatory called the Large Deployable Reflector. NASA funded Phillips and colleagues to explore the concept, and he and his colleagues at both Caltech and JPL worked on the SIS devices (in fact, Phillips helped start the Microdevices Laboratory at JPL).

Ultimately, NASA would choose to not build its own space mission and instead joined forces with the European Space Agency to participate in Herschel. Phillips served as the U.S. principal investigator for the mission’s HIFI instrument, which contained his SIS receivers.

“Tom Phillips played a huge role in ensuring the success of the Herschel Space Observatory and of HIFI, in particular,” says Paul Goldsmith, NASA Herschel project scientist. “His eminence and expertise helped get NASA to join the project, and his relentless enthusiasm for spectroscopy led to many important decisions about HIFI and related software that made it a very popular tool for studying the astrochemistry of interstellar space and how stars are formed and interact with their surroundings.”

Phillips was born on April 18, 1937. His father “had studied mechanical engineering before being forced to give up his formal education to assist his widowed mother at her Public House,” according to Peter Siegel’s essay on Phillips.

He received bachelor’s (1961), master’s (1964), and doctorate (1964) degrees from the University of Oxford in England, studying low-temperature physics. During this time, he was appointed to a Junior Research Fellowship at Jesus College. In 1968, after one year as a research associate at Stanford University and two years as a lecturer at Oxford, Phillips moved to Bell Labs, where he developed his first detector for submillimeter astronomy (called an InSb hot-electron bolometer) and used it to study atoms and molecules making up the interstellar medium, or the space between stars.

Working at various telescopes, including Kitt Peak National Observatory, Caltech’s 200-inch Hale Telescope at Palomar Observatory near San Diego, and the Kuiper Airborne Observatory, Phillips detected numerous new atomic and molecular species in the interstellar medium, including the surprisingly abundant neutral carbon atom. This latter result has greatly enhanced our understanding of how molecular clouds, the birthplace of stars, form and evolve.

Part of the impetus for these studies, recalls Zmuidzinas, came from Phillips’s colleagues, who worked down the hall from him at Bell Labs: Keith Jefferts, and Arno Penzias and Robert Wilson (PhD ’62), who shared the Nobel Prize in Physics in 1978 for the discovery of the cosmic microwave background radiation.

According to Siegel’s essay, “Phillips brazenly walked up to Penzias and told him that his diode mixer had very poor sensitivity, and that he should be able to do much better with an InSb device. … Penzias reacted in a very positive way to the criticism of this rather brash young physicist — he challenged Phillips to go and make a better receiver!”

Phillips did go and make a better receiver using the InSb device, and later would co-invent an even better device, the SIS receiver. Zmuidzinas remembers when he first saw spectral data from Phillips’s SIS device — it showed numerous “fingerprints” of molecules in the Orion Nebula.

“It was stunning to see the spectrum, a huge forest of information,” Zmuidzinas says. “This work ended up being one of Tom’s most cited papers.” The Orion survey formed the centerpiece of the doctoral thesis of Geoff Blake (Ph.D. ’86), now a professor of cosmochemistry and planetary science and professor of chemistry at Caltech.

“It’s like a forensic scientist dusting a surface of a desk to look for fingerprints,” Golwala says. “Tom's SIS mixer is like this — it lets you see the fingerprints of molecules in space that are otherwise invisible.”

Blake notes that he took two key lessons from Phillips’s mentorship: Think deeply about what is possible and what physics permits, and have a long-term plan to enable discovery. “Tom insisted, once the survey was done, that a single figure of all the data be generated. I am sure he had an idea of it in his head, that he had thought about the intricate physics,” Blake says. “In those days, it took minutes for the data to be loaded before it could viewed and studied. I still vividly remember that moment when it was revealed, late one night. Tom knew communication was just as important as the discovery itself, and his life and work have opened up new vistas for exploration.”

“Tom had an incredible appetite for work, and kept accreting projects,” says Zmuidzinas. “But even with so much on his plate, he was always very calm and methodical. He could expertly navigate complex and difficult situations.”

Zmuidzinas, who did his undergraduate work at Caltech and then later returned to the Institute, at Phillips’s urging, to take a faculty position [2], recalls that Phillips would gather his group every day for lunch. “We would walk to Grant Park at the corner of Michigan and Del Mar, stopping at Eddie’s Market (now the Ginger Corner Market) for sandwiches. We would sit on the grass in a big circle and talk about what was happening, research or otherwise. He treated his group like a big family — that was Tom in a nutshell.”

Phillips, who held an honorary doctorate from l’Observatoire de Paris, was a fellow of the American Physical Society (APS) and a member of the American Astronomical Society (AAS), the International Astronomical Union (IAU), and the International Union of Radio Science (IURS). From 1997–2002, he was the AAS representative to the U.S. National Committee for Radio Science.

In 2010, Phillips was awarded the NASA Exceptional Public Service medal for his work on HIFI. In 2008, he was chosen to be honored at the Templeton Xiangshan Conference in Beijing, China, at a celebration of the 400th anniversary of the invention of the telescope. The AAS awarded him the Joseph Weber Award for Astronomical Instrumentation in 2004.

Phillips is survived by his wife Jocelyn Keene, who is an astrophysicist and was a postdoc, senior research fellow, and member of the professional staff at Caltech and JPL for a total of 24 years. Phillips is also survived by their daughter Elizabeth, and his children Claire and Stephen.