Lutz was a well-known expert on planetary nebulae and variable stars. She served as director of the Division of Astronomical Sciences for the National Science Foundation and as president of the Astronomical Society of the Pacific. 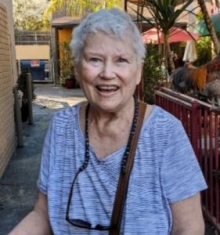 Julie Haynes Lutz died Tuesday, May 3, 2022, at her daughter’s home in West Sacramento, California, at the age of 77.

Julie was the daughter of the late Willard Damon Haynes and the late Julia Awilda Haynes. She was a pioneer woman astronomer, receiving her Ph.D. from the University of Illinois in 1972. Her research focused on planetary nebulae, gas clouds formed by expiring stars.

From 1971–1999, Julie worked at Washington State University, serving first as the director of the planetarium and later as the Boeing Distinguished Professor of Mathematics and Science Education and director of the astronomy program. She chaired the Department of Pure and Applied Mathematics from 1992 to 1996, and was active in improving primary and secondary school science education. She also served as the director of the Division of Astronomical Sciences for the National Science Foundation from 1990 to 1992 and as president of the Astronomical Society of the Pacific from 1991 to 1993.

Julie joined the Astronomy department at the University of Washington (UW) in 2000 as a NASA educator, and an Emeritus Research Professor. At the UW, Julie served as the Director of Manastash Ridge Observatory (MRO), and started the UW in the High School astronomy program. She was always generous with her time and her laughter.

“I attended the dedication of MRO in 1972, and I recall being very glad to have a research-quality telescope and instrumentation available just a 4 hour drive away from Washington State University in Pullman. In 2001 I was asked to become Director of the observatory. I accepted with pleasure because I think that MRO is a wonderful resource for both education and research. Students can ‘get their hands dirty’ by dealing with all the pleasures and problems of a research quality telescope plus instrumentation that usually behaves, but occasionally goes haywire, necessitating problem-solving, consultation, re-planning and other things that they will face in the real world of observational astronomy. By observing at MRO, many of our undergraduate students can contribute significantly to research projects that are published in journals and/or presented at conferences.”

In addition to her work at UW, in 2004 the United Negro College Fund gave Julie and her second husband, the late Dr. George Wallerstein, the President’s Award for their long-term fundraising activities for the organization. Julie also supported educators through NASA’s Space Science Network Northwest and organized meetings for local astronomy teachers.

Outside of research, Julie was an avid traveler and outdoorswoman who loved books, cats, music, food and theater. Julie was a pillar of strength and kindness in the department. She will always be viewed as one of the women that propelled the Astronomy Department at the University of Washington forward.

Adapted and reproduced with permission from The University of Washington.